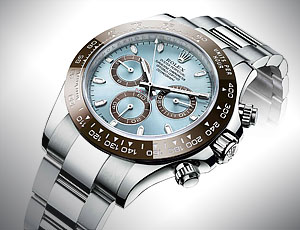 Rolex launched their first Daytona in 1953 and it was primarily designed to appeal to the avid race car driver. It quickly became a flagship model for Rolex and one that watch enthusiasts would covet for decades to come. As with anything that is in high demand, the counterfeit market for this watch is vast and there are far more fakes out there than there are real Daytonas. As such, it's important to be able to recognise some of the tell tale signs of a replica Rolex Daytona. 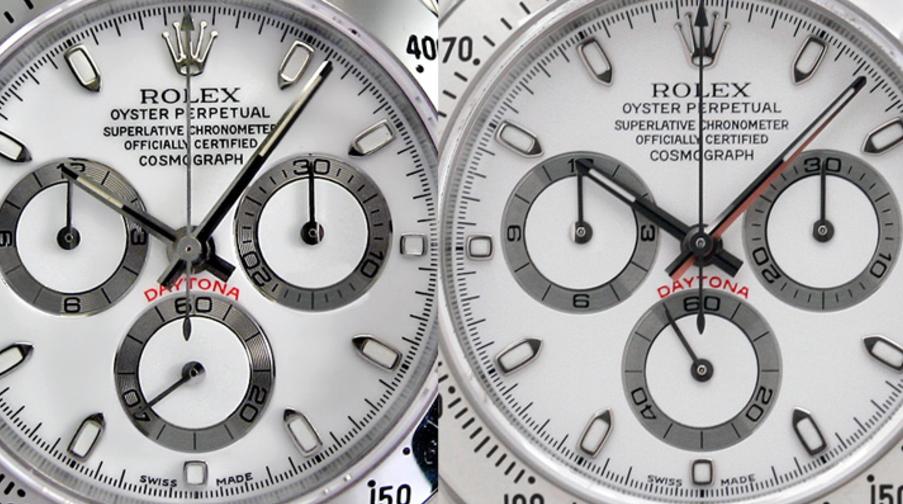 Replica is on the left

Perfect Font / Lettering
​Rolex are meticulous with their attention to detail. Quality control amongst Rolex staff is paramount. Lettering and print should appear perfect as Rolex wouldn't sign off a watch that was anything less. Eyebrows should definitely be raised if there is any discolouration or inconsistency within the lettering itself. The spacing and font should be exact and if there is any lettering that is bubbled or crooked at all, then it is most definitely a fake.

Date
Rolex Daytona does not have a date window. Any models containing this feature are absolutely replicas.

Clear Caseback
One of the simplest ways to spot a fake Daytona is to see if it has a skeleton caseback. This feature allows you to see the watch's inner mechanism and genuine Rolex watches don't have them. 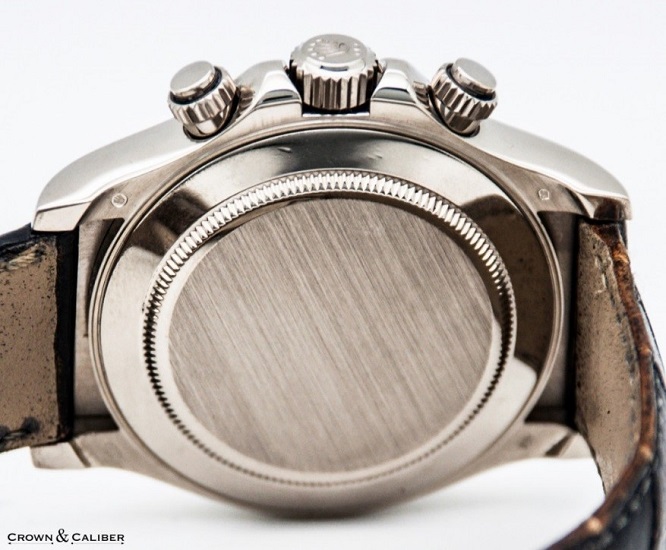 Engraving
​Rolex do not engrave the back of their watches. The caseback should be smooth with no logos or other designs. (A rare exception is a pre-1990s ladies' watch which had "Original Rolex Design" engraved on the caseback.)H

However, there are always engraving on the sides of the case at the lugs. One side will display the model number and the other will have the serial number. If these engravings are crooked or missing, then it's a fake.

Hologram sticker
​Genuine Daytonas have a 3D hologram-encoded sticker on the caseback. It has the watch's serial number in gold lettering although for post-2002 models, the lettering will be in black, not gold and there will be a Rolex crown above it. Although fakes may have a sticker, it usually isn't a hologram and won't change when viewed from different angles.

Daytona Hands
The hands of fake Rolex watches are often incorrect. The minute hand should reach all the way to the minute hand markers and fakes can be shorter. Be aware of the details of the Daytona model you are interested in as some modern Rolex watch hands have rounded tips.​

Model Number
It goes without saying that the model number on the watch should match the material. So if the model number refers to 18K white gold but the watch is stainless steel, then it's clearly a fake. Remember that to see the model number you need to remove the caseback from the bracelet and look at the centre of the lugs.

On real Rolexes, the serial and case reference numbers are engraved in such a way that they feature very fine lines which catch the light, similar to a diamond cut edge. Most fake Rolexes will have a sandy 'acid etched' appearance. Counterfeiters will tend to use the same numbers and they'll usually be too close together.

Micro Etched crystals
​Rolex have been putting micro etched logos on their watches since 2002 – it shouldn't be present in earlier models. It will be at the 6 o'clock position and because it's so tiny it is hard to see with the naked eye, but it will be just below the 6 o'clock marker under where it says Swiss made.

Movement
The movement should be a mechanical self-winding movement and if it isn't, chances are it will be a Chinese replica. If you are unsure in any way, get a jeweller to remove the caseback so you can see the inside.

Clasp
Turn the watch over and look for a discreet clasp with a Rolex crown symbol on the watchband. If there is no crown or clasp visible, the watch is a replica.

If you put the Daytona up to your ear and you can hear the ticking, it's most likely a replica. For genuine Daytonas, the sound should be almost inaudible.

​Any Rolex watch will be made from high quality materials and should have some weight to it. If it's lighter than you expect, it will most likely be a Chinese replica made of an inferior material.

Chronograph
You should always test the pushers to see if the chronograph function works. If they don't, it may well be a fake.

Triplock System
Daytonas have a triplock system to withstand underwater depths to prevent water from entering the case. The lack of this system is an easy way to authenticate a watch. If you pull out the crown there should be a black rubber gasket visible at the end of it – that's the triplock system.

Price
Obviously price is a dead giveaway when purchasing a Daytona as mainstream models won't deviate wildly from the RRP. Try to always buy your Daytona with the papers intact.

A Videos showing how to spot fake Rolex Daytona: