.The U.S. government estimates that less than 1/100 of 1 percent (that is, 0.01%), of U.S. paper currency in circulation is counterfeit. Considering recent advances in printing technology and the obviously vast incentive  to counterfeit bills, that is a small number. In part, that's because the U.S. Secret Service thoroughly investigates all reported counterfeiting cases, and because there arecriminal penalties for counterfeiting or passing fake bills. Maybe more than anything, though, counterfeiting is difficult because of the bills' security features, which are hard to reproduce but easy to use to verify your money's authenticity. 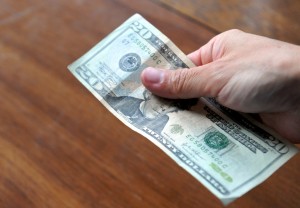 The paper that money is printed on has slightly changed since the implementation of cotton rag. While money rag now has colored filaments, the traditional feel of money was intentionally left unchanged over the decades, because of its distinctive feel. The feel of a bill made 50 years ago should feel similar to a brand new dollar bill. 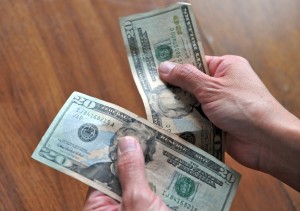 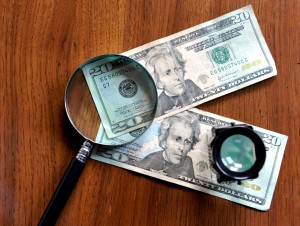 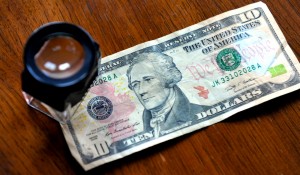 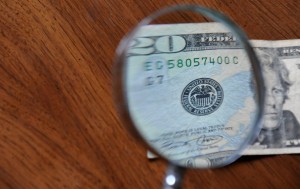 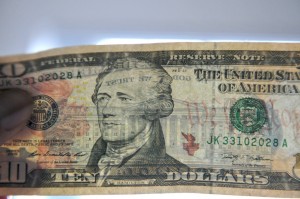 Hold the bill up to a light to check for a watermark. A watermark bearing the image of the person whose portrait is on the bill can be found on all $10, $20, $50, and $100 bills series 1996 and later, and on $5 bills series 1999 and later. The watermark is embedded in the paper to the right of the portrait, and it can be seen from both sides of the bill.
Tilt the bill to examine the color-shifting ink. Color-shifting ink (ink that appears to change color when the bill is tilted) can be found on 100, 50 and 20 dollar bills series 1996 and later, and on 10 dollar bills series 1999 and later; $5 and lower bills do not yet have this feature. The color originally appeared to change from green to black, but it goes from copper to green in recent redesigns of the bills.
Use a magnifying glass to examine micro-printing. Beginning in 1990, very tiny printing was added to certain places (which have periodically been changed since then) on $5 and higher denomination bills. The exact location of the micro-printing is not generally an issue. Rather, counterfeits will often have either no micro-printing or very blurred micro-printing. On a genuine bill, the micro-printing will be crisp and clear.Run your fingernail over the portrait's vest of the bill. You should feel distinctive ridges, printers cannot reproduce this.