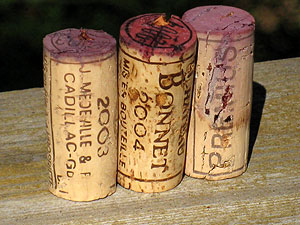 In this article we start series of review about fake Bordeaux wine and learn better how to buy genuine wine.
Counterfeit wine is rife within the industry and there have been several incidents recently concerning the discoveries of fake Italian (Sassicaia), Australian (Penfolds Grange), Canadian (Ice Wine) and fine European Wines (China).

Canadian ice wine is extremely popular in China. It has been reported that 6,300 boxes of counterfeit wine were destroyed on March 22nd in Guangzhou¡s Baiyun district. This was part of a large-scale campaign to crack down on fake wine production conducted by the Guangdong wine monopoly administration. The destroyed products were valued at over 40 million yuan, including fake brand-name domestic wines and famous imported wines.
Brendan Coffey, writing for www.forbes.com highlighted the situation in his article “Chateau Faux”:

“Wine counterfeiting is a big problem in China. There are a lot of companies that are now copying [wines],” says Allan Schmidt, president of Vineland Estates, a Canadian winery known widely for its ice wine. Schmidt should know: Five years ago he had a budding business selling $250,000 worth of wine a year in the People’s Republic. Thanks to counterfeiters’ imitating everything from the look of the bottles to stealing Vineland’s brand name, he sells only 5% of that today.”

There is a black market in Guangzhou for empty Bordeaux bottles which counterfeiters refilling bottles and passing them off as genuine. Coffey continues:

“With coveted wines like premier cru Bordeaux fetching thousands of dollars per bottle, the incentive exists to make an easy buck by pouring new wine into old bottles. Though estimates are hard to verify, 5% of the secondary market worldwide may consist of wines that are fake. In recent years authorities in China have uncovered bottles of fake everything, from a $4,000 bottle of Château Lafite Rothschild to 12,000 bottles of $10 Mouton Cadet.”

As counterfeit bottles of Australia’s most famous wine, Penfolds Grange, continue to circulate, Penfolds’ parent company Southcorp has instituted proceedings in the Federal Court in Melbourne in an attempt to bring to justice the fraudulent fakesters of pseudo Penfolds.

It is thought that three quarters of ‘Italian’ wine sold in the US is not Italian, and it is estimated that up to 10 million pound’s worth of counterfeit wine is sold annually across the world. The producers of one of the world’s most famous wines, Sassicaia, have been forced to redesign their bottles and introduce new security measures after 12 people were arrested in connection with the fraudulent sale and production of 20,000 bottles of wine designed to look like the super Tuscan red.

The counterfeit wine was offered at a knock-down price, and by someone unknown in the trade, fanning suspicions. When police raided cellars used by the gang they also found another six million bottles of bogus Chianti.

The incident has forced Sassicaia’s producer, the Marchese Nicolo Incisa della Rocchetta, to redesign his bottles with the name of his Tenuta San Guido estate now embossed in the glass. However, he fears that he will soon be requiring extra precautions, as the soaring prices of his wines make counterfeiting even more tempting to criminal gangs. As a result he is considering introducing a microchip as part of the label. He said:

“The microchip would be able to be recognized by an electronic reading device. Another solution is to have a label designed like a banknote, which would contain certain tell-tale details which the counterfeiter wouldn’t know how to spot.”

Before buying your wine there are several measures you can take to spot a fake. www.wine-searcher.com offers good advice:

“There is no substitute for having experience of genuine bottles. People who handle old wines on a daily basis quickly acquire an instinct for spotting counterfeit wines. So keep your old bottles and build up a collection in order to compare with more recent purchases”.

Features to look for:

The Bottle
Glass making has changed considerably since the bottling of famous vintages prior to 1982.

Capsules
These should be consistent with other known examples of the vintage; though there are a few rare examples of Chateaux using more than one capsule type for a vintage.

Corks
Chateau bottled wines have the correct vintage and brand labels on the cork. Before 1970 wine was often shipped in casks to wine merchants who bottled the wine themselves (leading to labelling such as “Belgium bottled”, “Berry Bros bottled”, etc., on some old wines).

Re-Corking
There was a tradition of re-corking wines, and refilling the bottle where levels were low. Penfolds seems to be the only company still doing this. Serena Sutcliffe (of Sotheby’s) for example is “against recorking of wines, even if old, as the shock is great and fraud made more easy by the practice”.

Labels
For old wines some label damage is to be expected, and perfect condition is a sign of possible fraud and/or storage in too dry conditions. Wine stored within the correct humidity range can naturally lead to some label staining. It is common for fraudsters to get the labels almost, but not quite, right. Check for spelling errors, font changes, etc.

Provenance
Wines that have been traded many times, or where there is vagueness about the ownership trail are clearly more open to fraud. At the other end of the market there are wines that have been cellared at the Chateau since bottling. These, rightly, command a premium in the market.

Generally, be wary of wines that look too good for their age, labels too perfect, or fill levels too high.

Refer to our previous blog on Investment in Fine Wines, a special for Bordeaux-Undiscovered which tells you about fraudulent companies.

“The microchip would be able to be recognized by an electronic reading device. Another solution is to have a label designed like a banknote, which would contain certain tell-tale details which the counterfeiter wouldn’t know how to spot.”

http://www.decanter.com/ have reported on a talking wine label which is to be released this Autumn. Kerin O’Keefe says:

”Italian label manufacturer Modulgraf has just announced its latest venture – the talking wine label. The company, which holds the patent for the microchip technology employed by many top wineries in the battle against wine falsification, prints labels for some of the biggest Italian wine producers including Ornellaia, Arnaldo Caprai and Tenuta Campo al Sasso, the new Antinori joint venture.

According to Daniele Barontini, president of the design company, the new technology is geared towards luxury wines and wine aficionados. ‘The label will retain its square or rectangular shape, design and colour. It will be made of plastic and can actually be removed and ‘read’ like a CD. The producer’s voice will explain the merits of the wine, give particulars of the vintage, and talk about the estate.”

DNA testing is also another method of combating fake wines. Scientists from the University of Seville, Spain, have developed a method of finger-printing Champagne, Cava, and other wines to prevent cheaper products being passed off as the more expensive varieties.

We recommend you to buy Bordeaux wine on Amazon.com Gourmet wine