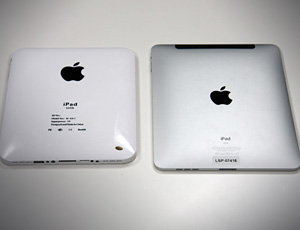 By now it’s becoming common to measure the real popularity of an Apple product by how fast China bootleggers decide to produce knockoffs of the device du jour. Therefore it should come as no surprise that fake iPads have started popping up in China and, despite their dubious origins, the products are doing brisk business. So how can we recognize a fake?

With its white shell and large screen this device could be the iPad that never was. Unfortunately, its plastic resistive screen with wavy edges, plastic body and price tag mark it out as something inspired by the designers from Cupertino, California, but not actually from the house that Steve built.

It is smaller, but fatter than the real thing. The differences in dimension come largely down to the smaller 7.9-inch screen. he fake iPad’s display isn’t only missing inches from its resume, it also does without the clarity, vibrancy and sheer number of pixels of the original — 800×600 versus 1024×768.

One of the few plus points for the fake tablet is its packaging. Despite the fact that it promises a real iPad, and the printing and image quality aren’t up to scratch, it is significantly easier, with its side-hinged top, to open than the real iPad’s box. 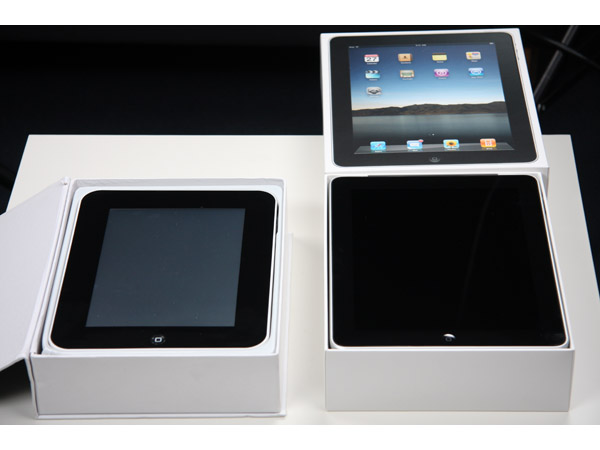 The back of the fake iPad proudly boasts 64GB of storage, but unfortunately the reality is that it has between 1 and 1.5GB of usable space. This can be expanded via a microSD card or USB flash storage, the connectors for which lie along the bottom edge of the device. Unlike Apple’s iPhone and iPad range, the file system is open to user exploration, both on the device itself or via a connected computer.

Also located along the bottom edge are a pair of speakers, a headphone jack and a power adapter. In the middle is a connector that looks suspiciously like Apple’s iPod/iPhone/iPad connector, but isn’t — it simply allows you to connect the fake device to a PC. Confusingly, this connector has to be attached to the fake upside down, with the connector’s marked side facing the floor, and there aren’t any markings to show which side of the USB plug is up.

The main difference is that fake iPas based on Android OS. Well, Android is very good itself but if you want to have Android-based tablet the best way is to buy branded device such as Samsung Galaxy Tab or New Amazon Kindle Fire, Full Color 7″ Multi-touch Display, Wi-Fi

How to buy genuine iPad

The best way to buy genuine iPad\iPad2 is to buy it from Apple store on Amazon.com