Gibson guitars are synonymous with quality, beauty and are desired by collectors and musicians the world over. The Les Paul, in particular, has aided in the creation of the modern music scene that we know today. However, this makes them expensive in their own right. They are constructed with the finest tone woods and are still very much hand crafted.
As the Gibson Les Paul is a highly valued guitar, many people will try to make fakes that will sell for far more than they are worth. Here are a few ways to help see these fakes. These knockoffs will not get past the experienced players, but they will be able to trap those who are not familiar with guitars. These instruments normally cost from two thousand to three thousand. So if they are offered for a few hundred then they are likely to be fakes.

If any seller is based out of China or another Asian country, then be careful. None of Gibson’s instruments are made in these places. All Gibson guitars are made in the United States of America. In general, be wary of second-hand online marketplaces like eBay where pirated goods could circulate. If you wish to purchase a Gibson Les Paul online, buy it from a respectable store such as Zzsounds.

Be aware of the common body shapes used by Gibson, and check those that you are looking to buy. Most of the fakes have a Gibson logo that is of a thicker font than the real Gibson logo and is aligned almost horizontally at the top of the headstock. The real Gibson logo is a thinner font and is angled with the G started near the post of the D string tuner. The real key is to look at the truss rod cover. Real Gibsons have a bell shaped truss rod cover with TWO screws, whereask fakes typically have THREE screws. Also, the copies of Les Paul Standards often say “Gibson” right on the truss rod cover, NO Les Pauls say Gibson on the truss rod cover, some Epiphone Les Pauls do but those aren’t made in the USA and say Epiphone at the top of the headstock not Gibson. 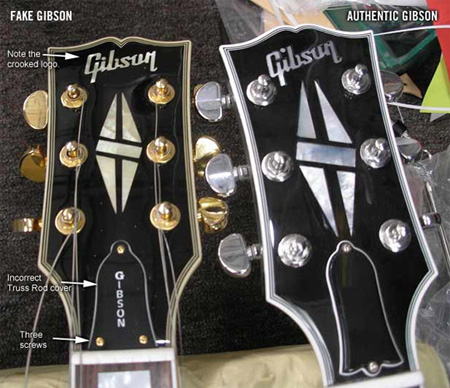